As you may already know, The Man In The High Castle is the Hugo Award winning, alternate history novel in which the Allies lost the Second World War, by American science fiction author, Philip K. Dick. What you may not know, is that the writer cited the primary influence for his work was the 1953 novel, Bring The Jubilee, by Ward Moore, which occurs in an alternate history, twentieth century United States wherein the Confederate States of America won the American Civil War in the 1860s. 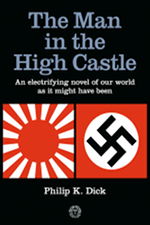 You learn something new everyday! Assuming, of course, that you weren’t already aware of this fun and cheerful fact.

If you have not read, The Man In The High Castle, perhaps you should add it to your pile of must read books, as it is arguably PKD’s most accessible and easy to follow novel. You may also want to add Bring The Jubilee to the list. I’ve not read it yet, myself, but it would be interesting to see how much influence it had on PKD’s story.

(This post originally appeared on my now defunct book blog, Another World.)