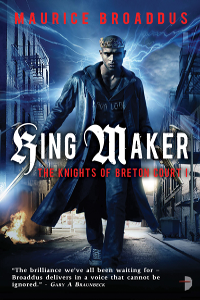 Recent years have brought about a growing trend which has seen the publication of numerous re-tellings/re-imaginings of classic works of fiction. Whether it be the reworking of popular children’s fairy tales into more “grown up” paranormal tales, or unconventional “mash-ups” blending horror with Victorian literature in the vein of Austen and the Bronte sisters, there has been several interesting, albeit not particularly good books written.

On the face of it, perhaps the most intriguing of all these re-tellings, is Maurice Broaddus’, The Knights Of Breton Court trilogy, described by some as The Wire meets Excalibur. The premise of the Arthurian Legend playing out on the crime ridden streets of an inner-city, African-American neighbourhood in contemporary Indianapolis, is an easy one to get excited about. Whether or not the end result is as easy to appreciate and enjoy is very much up for debate.

It must be said, from the outset, that this first book of the trilogy, King Maker, is a difficult novel to digest. It is a slow burn―one that requires considerable amounts of patience to finish reading. Even then, many of those readers who succeed in seeing it through to the very end will still, likely, have trouble deciding what to make of it.

That Broaddus, as an African-American author, was brave enough to take such a well known and enduring legend of European origin, and use it as the basis for an ambitious Urban Fantasy re-imagining―putting his own unique spin on it in the process―is admirable. Such an endeavour can and will be viewed as appropriation by some people, who will no doubt criticise King Maker without even reading the book. The author’s uncompromising commitment to authenticity, both in terms of the depiction of his setting and the portrayal of the story’s myriad characters, is also to be admired because, frankly, this authenticity (especially in relation to the depiction of black gang culture) will most certainly alienate many readers, for a number of different reasons.

As most of the book’s principle characters are either gang members or closely associated with gang culture, their actions tend to stray well outside the law. There is little black and white morality on show―mostly shades of grey. Consequently, there are few (if any) likeable characters given that many of them frequently engage in reprehensible acts of criminal behaviour. Even the Arthurian protagonist, King James White, though not a gang member himself, and despite his disdain for the gang warfare blighting his neighbourhood, is at times compelled to do some rather unpleasant things simply because of the prevailing nature of the gang infested environment he finds himself in.

In keeping with the aforementioned uncompromising authenticity, Broaddus never shies away from subjecting the reader to the harsh reality of gang life. The graphic depictions of violence throughout the book are sure to be an issue for some readers; King Maker is definitely not a child friendly affair.

Perhaps the most “problematic” aspect of Broaddus’ commitment to credibility is the use of ebonics in much of the dialogue of his characters. Readers unfamiliar with the terminologies and grammatical quirks inherent in the lingo, will have difficulty following and understanding everything that is being communicated. And for those of us who aren’t even American it is harder still. This, in addition to the unlikeable characters, will be the cause of some people’s inability to finish the book, though it’s by no means the main reason why most people will give up on King Maker before reaching its conclusion.

As previously stated, King Maker is a slow burn, and this is ultimately the factor that will be responsible for most instances of, “did not finish”. For most of the book, Broaddus’ narrative is very ponderous on account of so much time being devoted to introducing and developing the setting and characters, while so little time is spent on advancement of the plot. It is also easy to lose sight of the fact that King Maker is an Urban Fantasy novel since the fantastical elements, though fleetingly hinted at on occasion, don’t fully come to the fore until much later. In fact, the story only truly comes to life during the final third of the book, so it is those readers who are able persevere until then who will be rewarded for their patience; the author has saved all the good stuff for the dramatic third act.

I have to acknowledge that I have never read a book quite like King Maker before. It is a book I very much had to struggle to get into and complete reading. But irrespective of that, it’s unquestionably one of the most original urban fantasy novels I’ve come across, at a time in which I had come to believe there was no originality left in the genre. That’s not to say it will be enjoyed by all readers, because it won’t. If anything, the people most likely to enjoy the story are people who are unlikely to be readers in the first place. That may not translate as a ringing endorsement as such, but as book one of three, King Maker does succeed in doing what the first instalment of a trilogy should do: lay the groundwork for better things to come in the sequels, and entice people to read those subsequent instalments.

To conclude, credit is due to the author for adhering to his vision, though it will reduce the appeal of his work. Plus, I feel obligated to commend the publisher for its faith in the book. In the short time since its founding in 2009, Angry Robot has rightly earned a reputation for publishing works that most publishing houses would never take the risk in acquiring. It is for this reason that I consider Angry Robot to be one of the best fantasy & science fiction imprint at this present time.

One thought on “Book Review: King Maker By Maurice Broaddus” 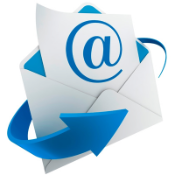 Join my mailing list today and receive a quarterly newsletter, and the occasional update weeks before non-subscribers.